To add your profile, email your picture and story to info@sceva.org 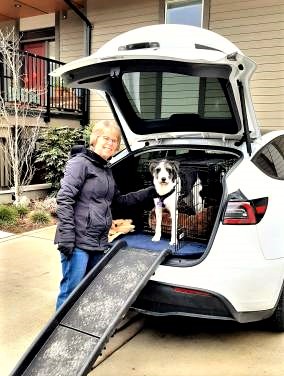 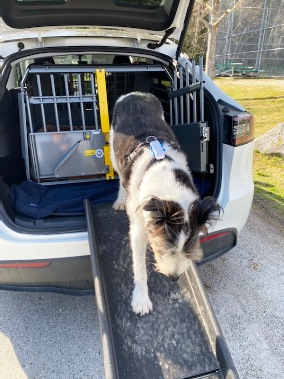 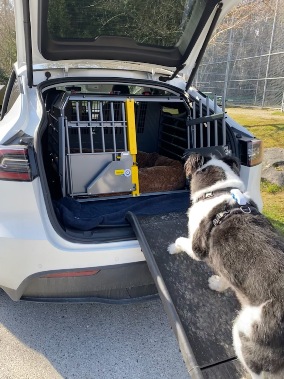 Sylvia and Kia (and Tina)

After getting past the puzzle of the door handle, my neighbour jumped into the passenger seat. She looked oddly elated. She said, “Oh my… the seat is sooo comfortable. I just love this dashboard and the simplicity of it. This is a really nice car.“ I thought, ya… this IS a damn nice car; probably the coolest car I’ve ever owned. There are so many things I love about that car. I love plugging into my home charger and avoiding gas stations. I love sitting in the ferry lineup with my heat on in the winter, not disturbing anybody else with my fumes. I love travelling on the ferry watching Netflix (and with climate control on). At first, I admit, I did have range anxiety. But after making several long-distance trips, I realized it’s nothing of concern at all. Well… so long as you’re not travelling into the far North. I chose the Tesla Model Y so that I could fit my dog in her crate in the back. It was super important to me to ensure her safety.

Getting back to my neighbour… a kilometre or two later, after inspecting all the details in the front of the car, she said “is there anything you don’t like about this car.“ I said, and I had to pause, “ huh… nothing actually comes to mind.” A short while later I did remember one thing that I didn’t like that much. I would’ve liked more ground clearance on the car. I previously owned a Subaru Forester and I could take that car anywhere. However, my off-road days are fewer and further between, and I love driving Tina the Tesla on the highway. Even when she screams at me that I’m going within 5 km of the top end speed. You see when you have an electric car, it’s hard to hear the engine reving up, and it sounds the same whether you’re going 80 km an hour or whether you’re going 135 km an hour. So now, I have set a warning to let me know when I’m going beyond the speed limit. Ha! Oh.. and one more thing….. what I really, really love is that the software constantly updates itself. So in 10 years, I will still have brand new technology. Gotta love that! Thanks Elon for your progressive thinking that is way outside the box! I love my Tesla.
Sylvia and Kia, proud and enthusiastic Tesla owners